After Vietnam, Indonesia and Malaysia tipped to be next countries in region to have a nuclear power plant 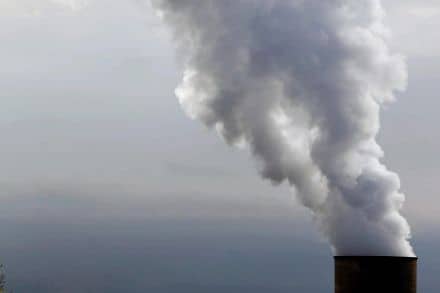 Singapore – Quietly but surely, several countries in South-east Asia are tiptoeing closer to nuclear energy as they look to bolster power production to meet rising demand from fast-growing economies. Singapore, meanwhile, is working to sharpen its expertise in nuclear safety-related matters.

In the past few months, countries such as Cambodia, Laos and Indonesia have signed a raft of agreements with Russia relating to nuclear energy. At the Russia-Asean Summit last month, Cambodia signed several memorandums of understanding (MOUs) to create a nuclear energy information centre and a joint working group for the development of nuclear energy in the country.

Cambodia has discussed the possibility of benefiting from nuclear energy in the long term, said deputy environment minister Tin Ponlok at a nuclear industry conference in Moscow in end-May. “The signing of the MOUs is part of our effort to become an upper-middle-income country by 2030,” he said. “We need to move towards (a) knowledge-based economy by promoting research and development.”

In April, Laos agreed to cooperate with Russia on the design, construction and operation of nuclear power plants and research reactors. Local media reported last year that there are plans to build two nuclear power reactors in the country, with a capacity of 1,000-1,200 megawatts each.

At the Moscow nuclear conference, the University of Indonesia inked an agreement with Russia’s nuclear state agency Rosatom to develop partnerships between the university and Russian higher education institutions, as well as to raise the understanding of nuclear energy among the general population. Indonesia and Malaysia are deemed to be the most likely to become the next South-east Asian countries with a nuclear power plant, after Vietnam.

Interest in nuclear energy has picked up in South-east Asia, noted Egor Simonov, Rosatom Asia’s regional vice-president. “There is increasing electricity demand, and there is a shortage in countries like Indonesia,” he told reporters on the sidelines of the conference. “The baseload capacity that can satisfy the requirements is not available.”

Energy demand in South-east Asia is expected to grow by 80 per cent by 2040, says the International Energy Agency (IEA), as the regional economy more than triples in size and its population rises by nearly a quarter to 760 million.

Nuclear energy will make up one per cent of the total energy demand, and fossil fuels will provide 78 per cent of the energy needs, according to IEA’s energy outlook report on South-east Asia last year.

Countries such as Vietnam and Thailand had planned to start the operation of nuclear power plants as early as 2020, but the Fukushima disaster in 2011 prompted governments all across the world to re-look nuclear power development plans and safety regulations.

In the face of increased domestic opposition, Thailand shelved its plans. Meanwhile, Vietnam postponed the construction of the nuclear power plant to 2019.

The latter is now considered the forerunner in the region for nuclear energy. Rosatom, the company engaged to build the first two reactors in Phuoc Dinh province, said construction details are currently being finalised.

The heightened nuclear-related activity in the region takes place against the backdrop of a nuclear power generation industry that is shifting towards Asia. According to US-based nuclear energy consultancy Ux Consulting Company, two-thirds of all new construction till 2030 will take place in China, India, Russia and South Korea.

By that year, North America and Western Europe, thus far the dominant regions in nuclear power generation, will see their capacity reduced from the current 60 per cent to 40 per cent of the global generation capacity, said Ux’s vice-president of policy Anna Bryndza.

For Singapore, a two-year pre-feasibility study in 2010 had concluded that nuclear energy technologies currently available are not yet suitable for use in the country. It will nonetheless continue to monitor progress and keep its options open.

The country also needs to strengthen its capabilities to understand nuclear science and technology, as well as facilitate global and regional cooperation on nuclear safety, said the Ministry of Trade and Industry (MTI).

This led to the creation of the Singapore Nuclear Research and Safety Initiative (SNRSI) in 2014 at the National University of Singapore (NUS), which hopes to build a critical mass of experts in nuclear safety, technology and policy in a single institution.

Last year, NUS signed an agreement with France’s Institute for Radiological Protection and Nuclear Safety, under which the latter’s training arm will conduct training courses for SNRSI.

As part of SNRSI, some S$8.4 million will also be set aside for a Nuclear Education and Training Fund, which includes support for scholarships, nuclear safety training and attachments to overseas institutes for on-the-job training, said the National Research Foundation (NRF).

Already, an SNRSI scholarship launched in 2014 has been awarded to a student in Cambridge University doing a PhD in radiolysis. Up to eight more candidates will start their studies this year, said an NRF spokeswoman.

“Singapore will also continue to keep abreast of the latest nuclear technologies by participating in seminars on nuclear safety and security, as well as learning from the experiences of other countries,” she added.

The Republic has since 2000 also cooperated with the International Atomic Energy Agency (IAEA) to jointly provide technical assistance to developing countries to promote the safe, secure and peaceful use of nuclear technologies.

The MOU between them was extended to more areas, including nuclear medicine and nuclear safety, when renewed in January last year, said a Ministry of Foreign Affairs (MFA) spokeswoman.

Singapore has facilitated scientific visits and fellowships for 150 candidates from developing countries in various fields such as nuclear medicine, radiation oncology and therapeutic radiology, she said.

“Singapore has some experience and expertise in applying radiation and nuclear science for medical and industrial use (for example, diagnostic radiography, radiotherapy, and petrochemicals),” she explained. “We are keen to contribute to regional capacity and knowledge-building efforts by sharing our experience in these areas. Where areas of expertise are limited in Singapore, we collaborate with IAEA to invite foreign experts to Singapore and provide the facilities for the training of regional participants.”

The government is on the right track, said Victor Nian, a research fellow at the Energy Studies Institute.

“Whether they’re doing enough, time will show. It’s hard to say now,” he said. “As a country which has never had any experience in nuclear energy, you’ve got to start from somewhere.

“As the needs arise and the region begins to accumulate experience in nuclear energy, Singapore will learn. And I’m quite positive it will be able to catch up very quickly,” said Dr Nian.

Meanwhile, for some countries in South-east Asia, the path to using nuclear energy may be a long one.

Before a nuclear power plant can be built, there are many steps that have to be taken first, such as the creation of a government nuclear agency, a separate nuclear regulator, the training and education of students and specialists, and also the construction of research reactors, said Rosatom’s Mr Drozdov.

Public acceptance, too, is a necessary step in building a nuclear programme, he added. “It’s a political decision that has to be made.” 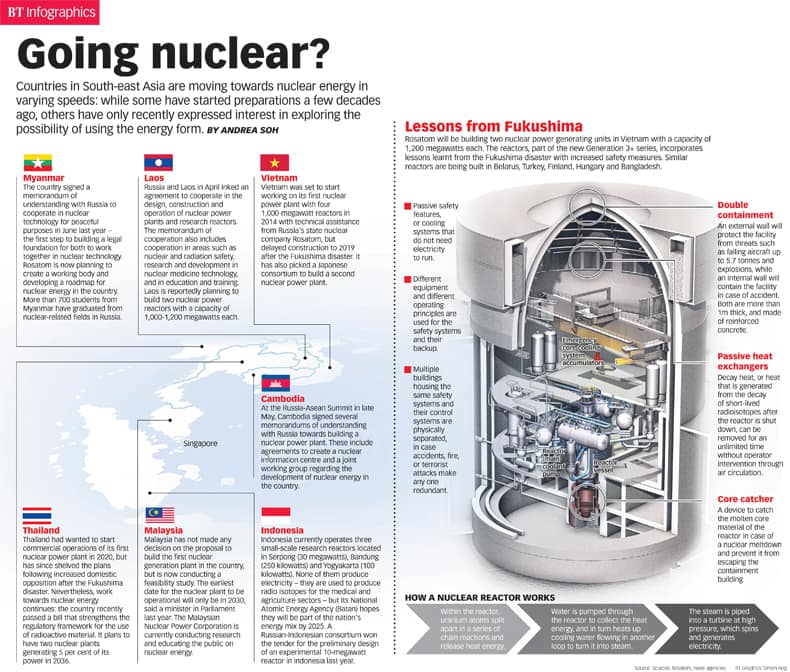